You are here: Home

The Economic News That Did Not Make Headlines This Week 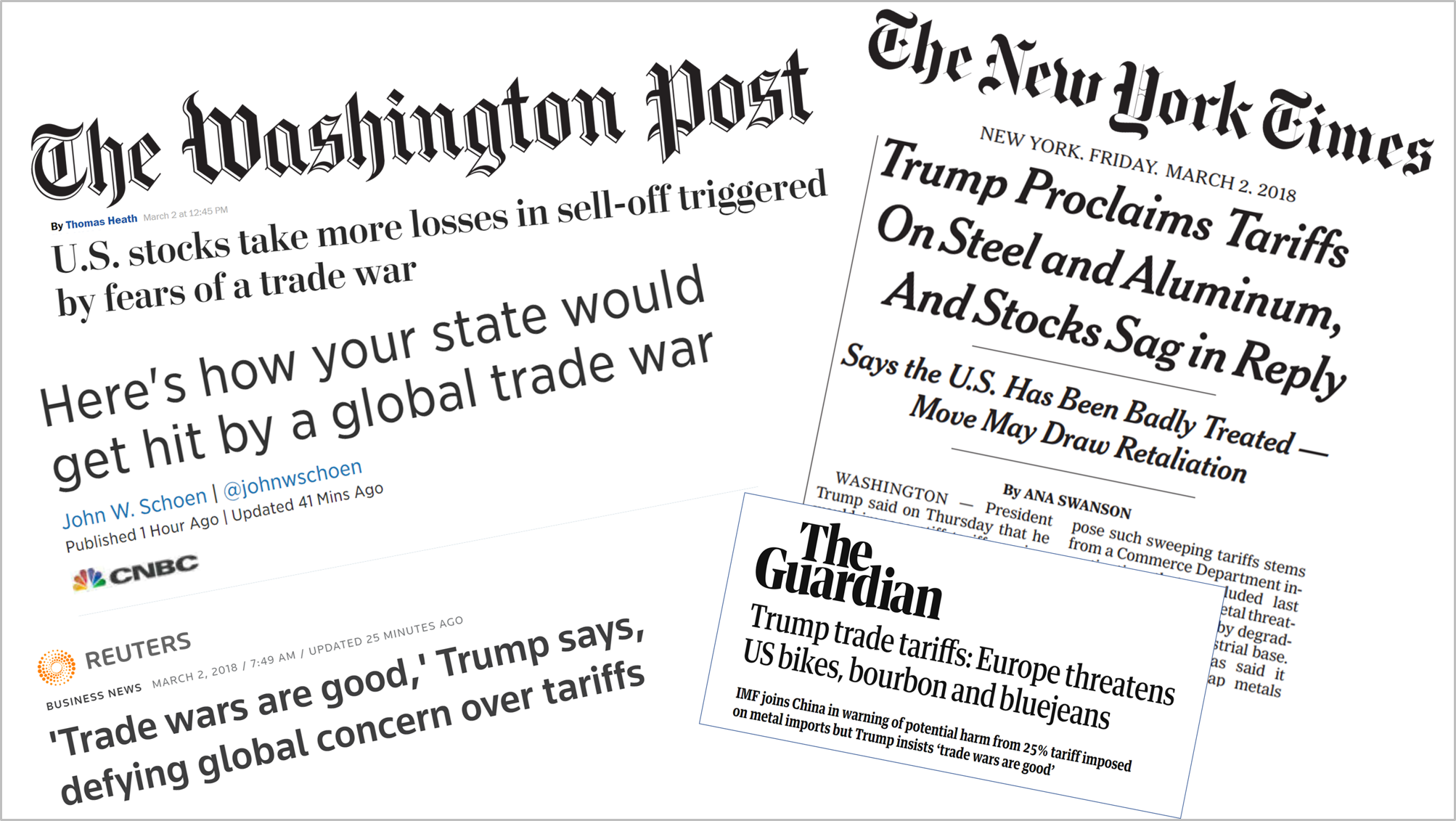 Economic data showing mild inflation amid rising employee compensation, along with reassuring testimony before Congress by the new Federal Reserve chair, was overshadowed by stock market volatility this past week. While worries about a trade war dominated headlines, newly released data showed that inflation in January did not shoot higher as many had feared, and healthy growth in wage gains was reported. 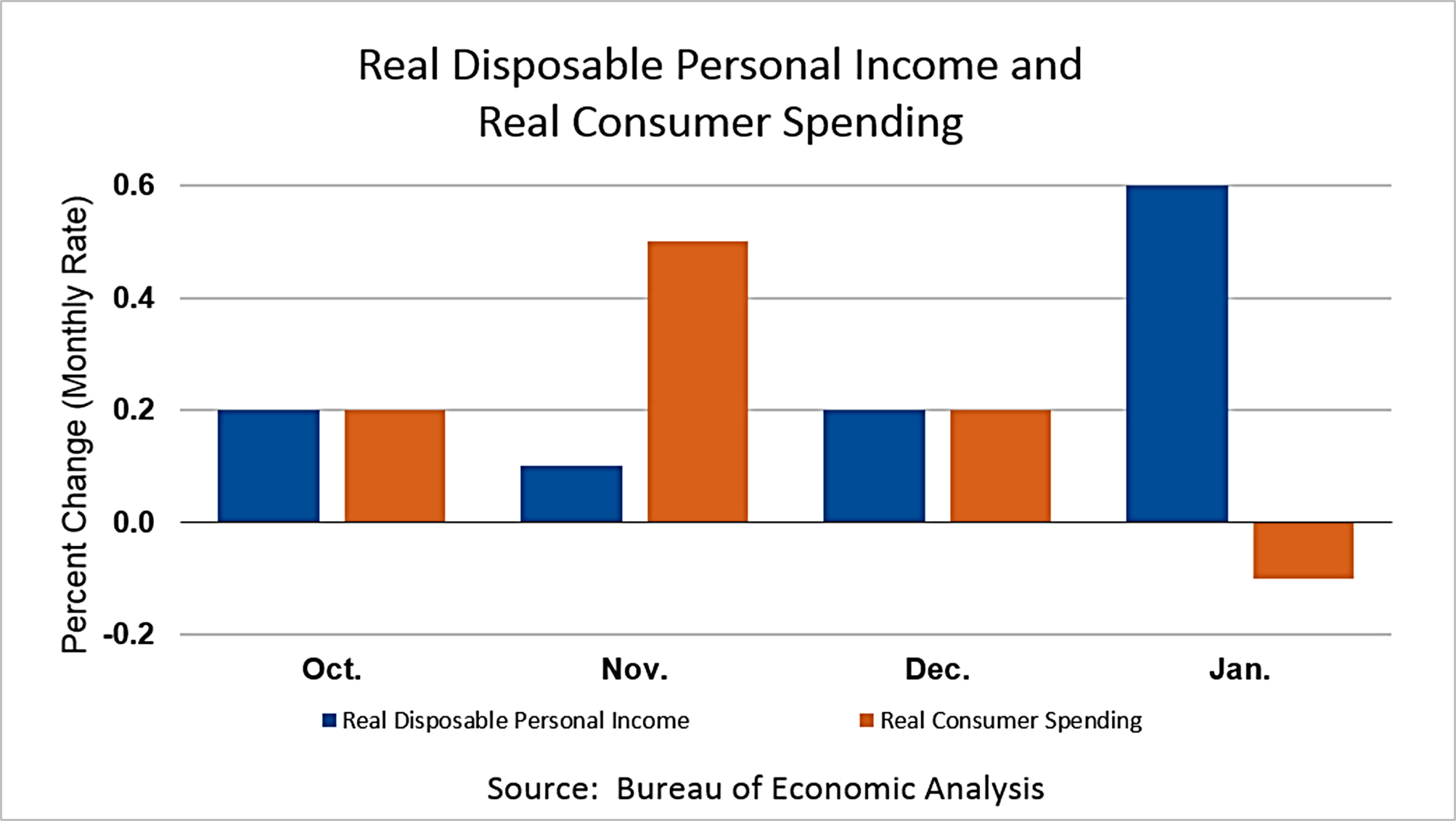 Personal disposable income soared in January. The effects of the federal income tax cut are starting to coarse through the economy, and that means rising spending is in the pipeline. That boosts economic growth, which leads to higher corporate earnings. 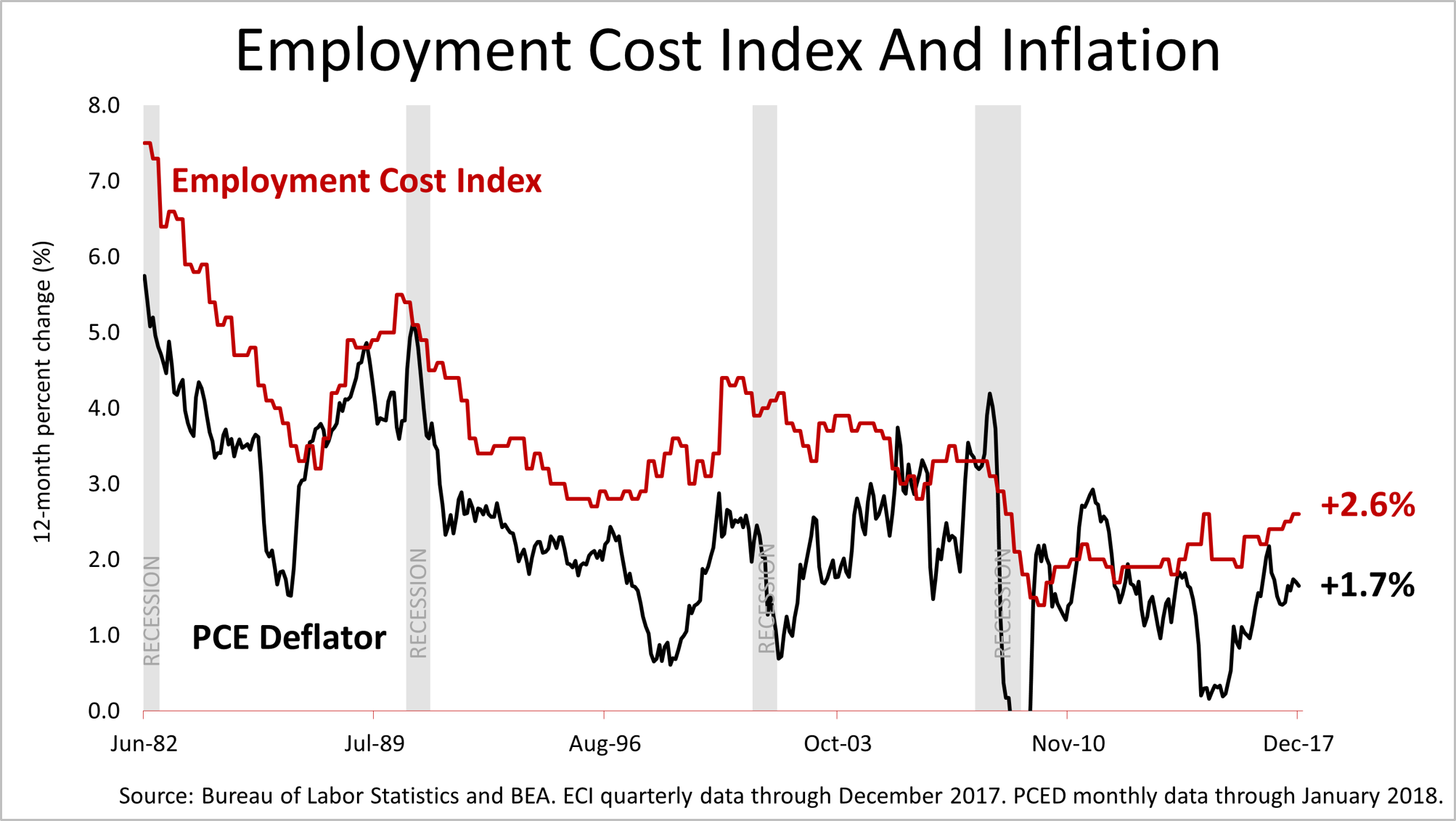 Significantly, the inflation indicator watched closely by the Fed - the personal consumption expenditure deflator - remained unchanged in January from December 2017, at 1.7%.


Real income growth with low inflation keeps the cost of hiring employees down, as shown in the employment cost index. This could mean productivity is growing. It will take more time and data to confirm if productivity growth is underway, but productivity is an important and somewhat mysterious factor in economic growth and this trend could be significant. 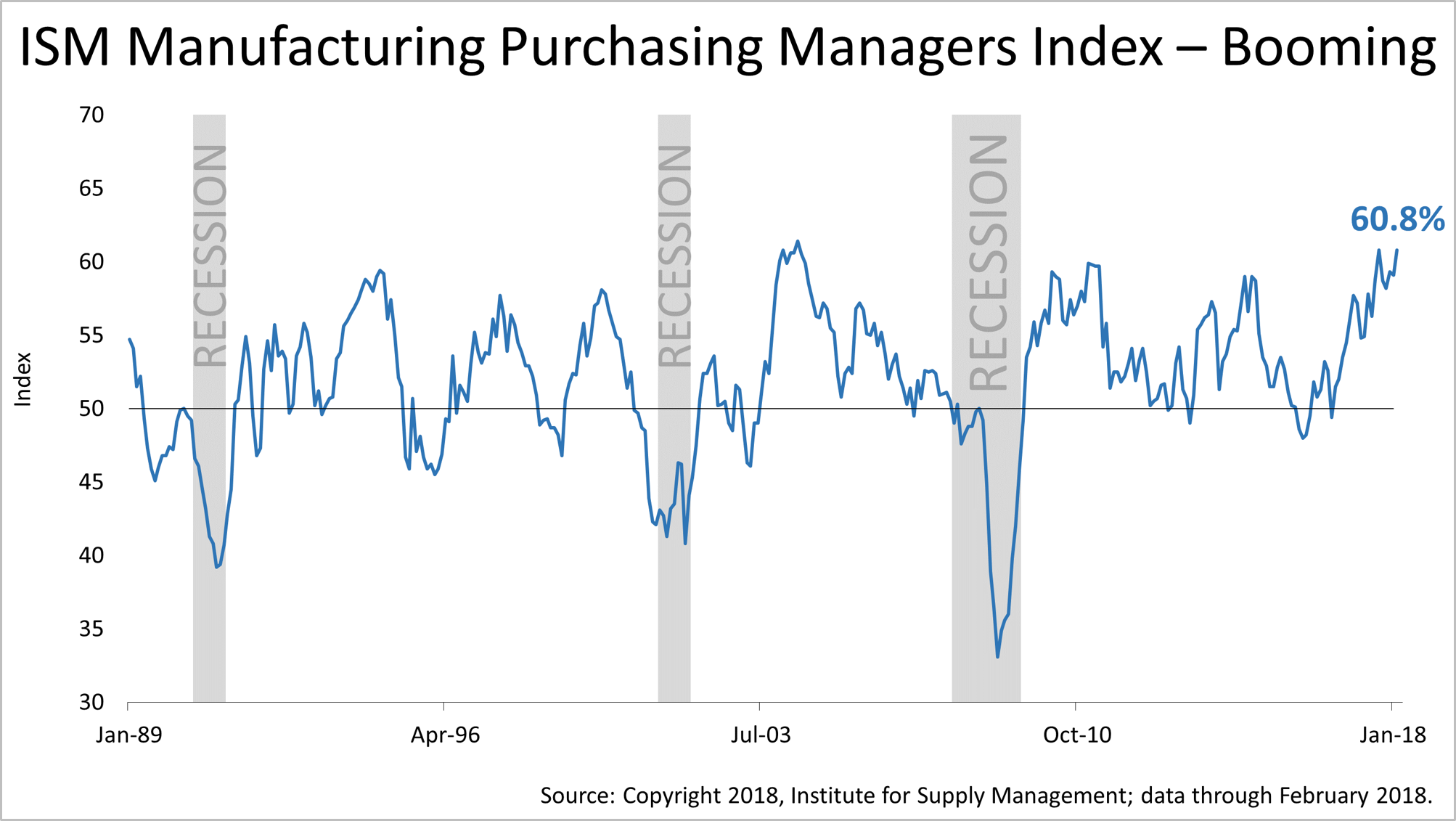 The PMI has historically slumped to a reading less than 50% just before the economy slid into recession in the past. While some talking heads on TV say a recession is on the way, this index belies any such notion. 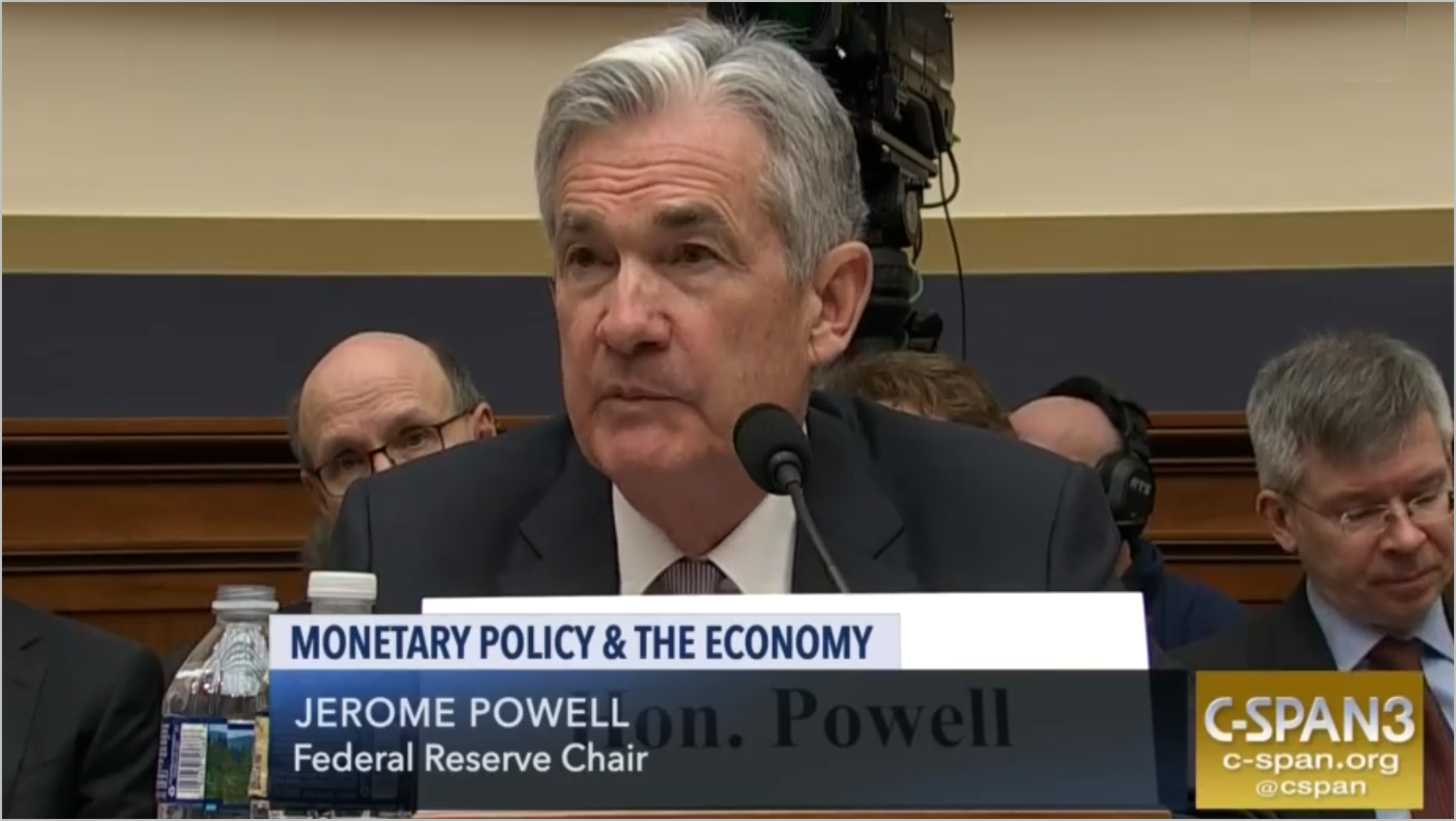 Amid the benign inflation outlook and continued signs of economic growth, the Fed did not change plans for slow and steady rate hikes, according to Jerome Powell, the new Federal Reserve chair. In testimony before the Senate on Thursday, Mr. Powell said the Fed expected inflation to only gradually trend back toward its 2% target. At his first major public appearance since taking the helm at the Fed three weeks ago, Powell's remarks reflected the same outlook voiced by his predecessor. Since every recession of the post-World War II era was caused by a Fed policy mistake, the new Fed chair's message of a very steady monetary policy was reassuring, though it did not make big headlines. 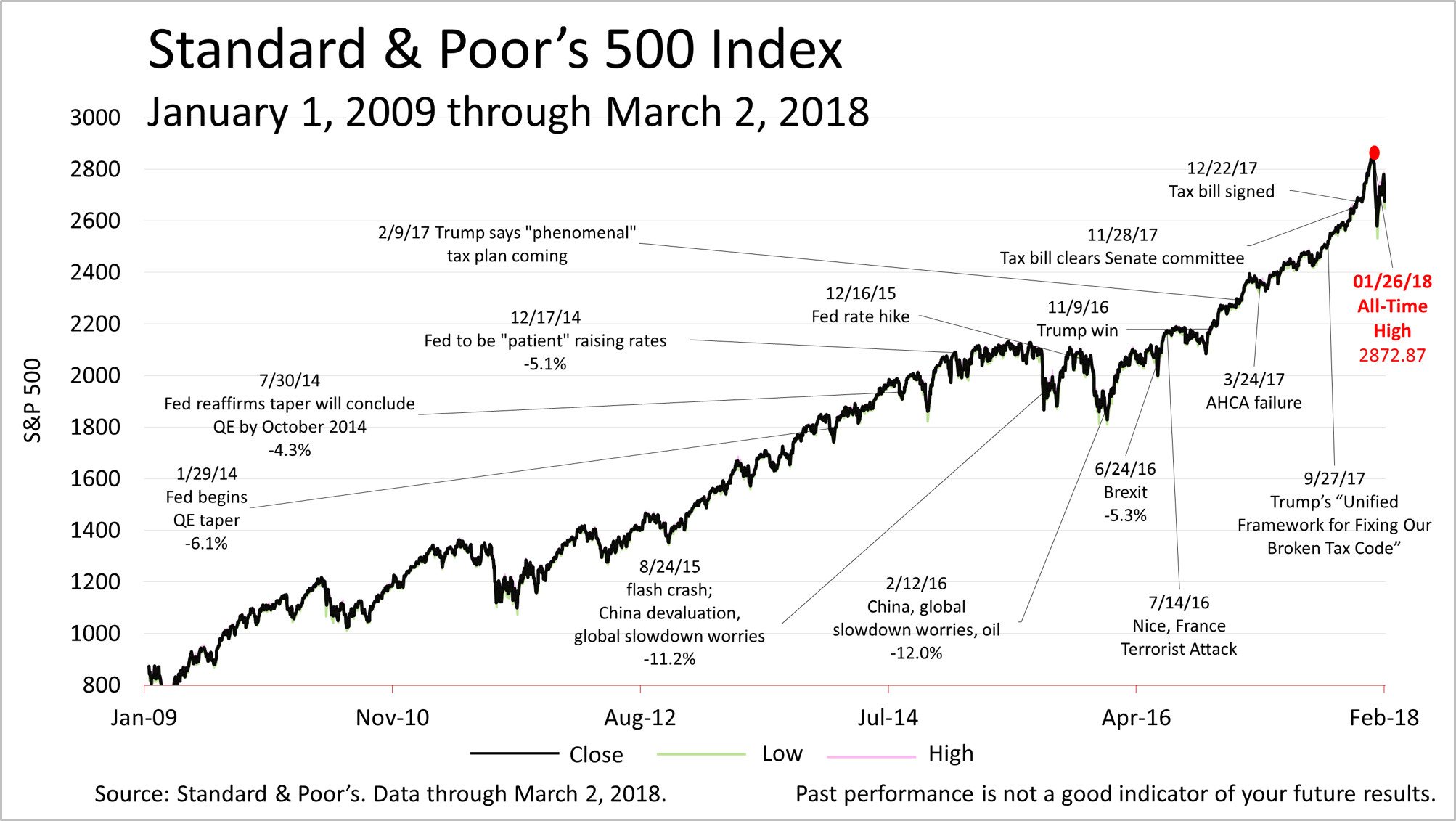 The Standard & Poor's 500 had a turbulent week, plunging more than 1% Thursday, after President Trump said he would slap a 25% tariff on imports of steel and a 10% tariff on foreign aluminum.


With the economy showing signs of strength and stocks valued fairly, stock volatility is likely to remain subject to emotion, headlines and increased volatility.

This article was written by a veteran financial journalist based on data compiled and analyzed by independent economist, Fritz Meyer. While these are sources we believe to be reliable, the information is not intended to be used as financial advice without consulting a professional about your personal situation.

Indices are unmanaged and not available for direct investment. Investments with higher return potential carry greater risk for loss. Past performance is not an indicator of your future results.

This article was written by a professional financial journalist for MidAtlantic Capital Management, Inc. and is not intended as legal or investment advice.

If you have friends or family members who need unbiased advice, please feel free to have them contact us.

We are available to provide an objective complimentary investment analysis of their current situation.

For more information or to schedule an appointment, please contact us.This email address is being protected from spambots. You need JavaScript enabled to view it.